Tenby’s history is captured in its shield. It has appeared for centuries upon the ancient seal above a stylised castle. The upper half is evidently derived from the Arms of the de Valence Earls of Pembroke, who built the castle and walls and gave the earliest characters.

The lower half of the shield is believed to be based on the arms of the Sea of St Davids. Colours have accordingly been officially designed to the ancient shield, so that the de Valence martlets are shown red upon white and blue bars, and the cinguefoils black upon gold, as in the parent arms.

Above the shield is the closed helm proper to Civic Arms, with its crest-wreath and decorative mantlings in the de Valence colours, blue and white. The crest combines the ship flying flags and displaying the white fleur de lys on blue, emblem of St Mary the Virgin, patron Saint of the Parish.

The supporters are two heraldic golden dolphins. These refer to Tenby’s descriptive name Dinbych y Pysgod, and allude not only to the ancient fishing industry but also to the modern importance of Tenby as a seaside resort. They support pennons bearing the white and blue liveries of the House of Lancaster and the white and green of the House of Tudor, in reference to the Charters of Henry 1V and Elizabeth 1. They are charged also with roundels derived from the badge of the Round table which presented the Arms to the town. The gold mural crown set over the black and white background suggests the links between the table and the lift of the town.

The motto, from Eurpides “Iphigenia in Tauris” means “The sea washes away all the ills of men”.

The regalia plays an important part in remembering those who were part of Tenby Town Council’s history.

By Charter of Charles 1 the Corporation were granted the right of two maces. There is as far as can be ascertained, no trace as to the exact date the two silver Maces were purchased, but it must have been prior to 1640, the Charter bearing the date 1631. Charles was beheaded in 1649, and during the period of the Commonwealth all emblems of Royalty on the maces were defaced, leaving only the Crown of St George intact on the shields surrounding the cup of each Mace. The date engraved on the bases clearly related to the restoration after the restoration of the Monarchy under Charles 11.

This information was provided by Mr Davis, City Architect, Bath, a great authority on the subject during a visit to Tenby. At that time he was engaged on a book dealing with the Regalia of the various Municipal Boroughs in England and Wales. He inspected the Maces and drew particular attention to the destruction of all Royal emblems. Both the Maces were then in a very bad state of preservation, being very much mattered and certain parts of the cup on each completely broken away. On the occasion of a visit to Tenby by the British Archeological Society in September 1884, Mr George Lambert, FSA of Coventry Street, London, the head of the old established firm of Royal Silversmiths, stated to be an authority on ancient silver, gave an address in the Town hall on the subject of the Maces. He spoke of their use, and origin. He gave the date of the Tenby Mace as that engraved on their bases (1660, repaired 1737, repaired 1857). Mr Lambert offered to restore both Maces, also their leather cases which was gladly accepted by the Corporation.

The two Maces were restored, the missing parts replaced. Unfortunately however, the Royal Arms engraved on the cups of the Maces were those subsequent to the Union of Scotland, and not those of the period when the Maces were made.

The Maces are very interesting also as the cups are made to unscrew and can be used as drinking vessels. And the stems end with a screw, by which means the Maces could be placed upright on the table. 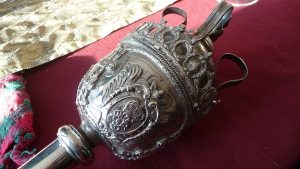 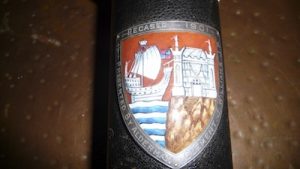 The Corporate Seals, two in number, contain the arms of the Borough, with the following inscription on each;- “Sigillum Maoris Villa Tenby”.

The larger seal, used for ordinary purposes, is of brass and has every appearance of considerable age, but no date is given nor is there any record to show this. The smaller Seal is of silver and bears on the reverse the following inscription;- “John Bowers, Mayor 1858”. This seal is used for sealing small documents. The original seal granted under Charter of Queen Elizabeth 1581, is referred to earlier in these notes; there are few impressions from it attached to some old Counterpart leases but in most instances the impression is very indistinct, from which it would appear to have been very much worn when last in use.

This is comparatively modern, having been purchased during the Mayoralty of Joseph Gregory (1878/9). The original chain of office is held at Tenby Museum.

It was provided by voluntary subscription from Gentlemen living who had served the office of Mayor, and other members of the Council and officials. It originally consisted of 48 links with a large oval badge containing the Arms of the Borough, supported by small representations of the official Maces.

The name of Mr Gregory is inscribed on the base of the original badge with the names of succeeding Mayors on the links.

Hanging below the three feathers shield above is a Mayors Badge of Office. This was renewed in 2003 and donated to the Town Council in memory of David Gwyon Thomas “A Tenby Boy” who died in August 2003.

The Mayors Consort Chain of Office was donated to the Town Council in 1992 in memory of Kristian D Chapple. 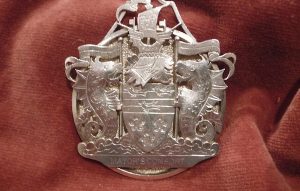 Prior to 1887 the Mayor had no robe of office, but in that year a robe was purchased by voluntary subscription and was used for the first time on the occasion of the jubilee of Queen Victoria.

Robes of Town Clerk and Sergeants at Mace

These were presented to the Borough during the Mayoralty of Mr Clement John Williams in 1889.

Roll of Mayors of Tenby